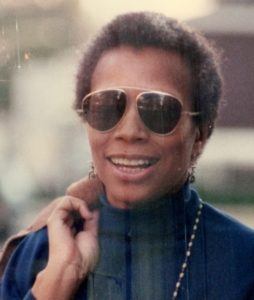 Kitch Childs, as she is known, was born Ellen Childs in Pittsburgh, Pennsylvania, in 1937. Kitch and her 3 brothers were raised by their grandmother in Chicago. During that time, she experienced the loss of two of her brothers due to racial violence. Her oldest brother Kenny Clarke became a well know jazz drummer. Kitch was one of the first Black women to graduate with a PhD in human development from the University of Chicago. She was a founder in 1969 of the Association for Women in Psychology (AWP) and in the early 1970s of the Chicago Lesbian Liberation group. Kitch was an activist who sought justice for African Americans, the poor, gay/lesbians and prostitutes. She suffered a great deal as a triple minority (female, lesbian and Black) during her enlistment in the Navy and her time at the University of Chicago. The intensity of her advocacy, her childhood pain and her triple minority status played a role in her daily use of marijuana. In the 1970s Kitch moved to Oakland, California and opened a private practice in the home she inherited from her brother Kenny. She was a strong proponent of Feminist Therapy and utilized a treatment model that helped her clients advocate for themselves and for racial justice. She used a sliding fee scale that allowed her clients to pay what they could afford and frequently that was nothing. She died Jan 10, 1993, at the age of 55 in her apartment in Amsterdam, where she had lived since 1991.