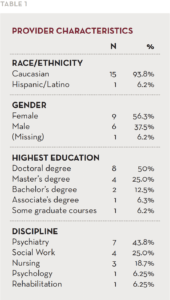 The idea behind the ACT model is to provide the assistance necessary to help consumers to continue to live in the community and work toward a higher quality of life (Boust, Kuhns, & Studer, 2005).

Between March and April 2014 as part of the Minnesota 10 x 10 initiative, we conducted three focus groups with providers from multiple disciplines currently working on ACT teams (Trangle, Mager, Goering, & Christensen, 2010). A total of 16 providers participated in the study. The focus group participants in this study included psychiatrists (n=7), social workers (n=4), nurses (n=3), a psychologist (n=1), and a rehabilitation practitioner (n=1) as shown in Tables 1 and 2.

The questions addressed by the focus groups pertained to barriers providers and consumers encounter when trying to access primary health care, strategies being used by providers to overcome these barriers, and recommendations for improving the integration of mental health services (e.g. ACT) and primary health care.

Focus group transcripts were analyzed using qualitative data methods to elicit common themes across key areas. In the following sections we describe barriers to integration of mental health and primary care followed by a focus on strategies used to overcome barriers and recommendations for the future. The provider-identified themes from the focus groups are shown in Table 3.

ACT team members discussed three main types of barriers including provider, consumer, and system barriers. ACT team members noted role confusion at times, citing that sometimes their assigned tasks were not within their area of professional expertise. Another barrier providers encountered was a lack of consumer engagement when the consumer and provider had different ideas about treatment goals. 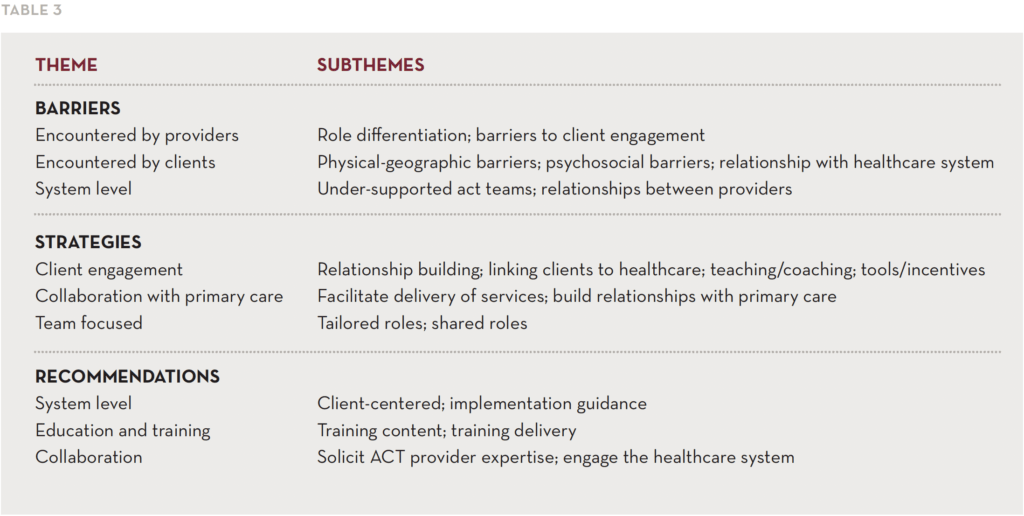 “A huge barrier is the push-pull between the primary care and psychiatric care, physical health and mental health.”

Consumers encountered independent barriers to obtaining primary care. These barriers included geographic location of the consumer, frustration with lack of progress in treatment, and behaviors that may be counterproductive to bettering overall health.

“Just hearing those two words: “quit smoking”, in an of itself, creates several mountains of barriers.”

Consumers in rural areas may have had difficulty attending appointments since many clinics are located in urban areas, and some consumers had limited transportation options. ACT team members in the focus group noted that many consumers have negative past experiences with health care providers, and consumers may feel fatigue, frustration, or avoidance due to the complicated nature of health care services.

In addition to discussing barriers to integration of ACT and primary care, ACT team members also discussed strategies that they have used to overcome these barriers including promoting consumer engagement, collaborating with primary care, and team building. Engaging the consumer in their own health care was a very important goal among ACT team members. They use strategies such as coaching/teaching consumers how to best engage with health care services and using tools or incentives to promote consumer ownership of their health. ACT team members noted that the two most effective strategies they used were building positive long-term relationships with consumers and attending medical appointments with the consumers. Overall, ACT team members stated that the strategies they use to promote client engagement are flexible and consumer-centered.

“We are starting to do more texting. Our nurse is really linked up with the doctor’s nurse…instead of phone calls, they are…texting.”

“She hadn’t been in for a physical in years; because she wanted to learn how to cook we bought her a Crockpot once she went in for her physical.”

Based on the barriers to integrate primary care with ACT services and the strategies already in use by ACT, the following are recommendations for enhancing collaboration between primary health care and mental health care services. Emphasis should be placed on overall consumer wellness using both qualitative and quantitative measures. In order to better prepare ACT providers to collaborate with primary care, ACT team members recommended that medically focused trainings specific to medical terminology and disease processes be offered. To better collaborate with health care professionals, ACT team members also suggested developing database technology that would allow medical providers to look at relevant information on ACT consumers. Training on ACT services should also be offered to medical providers.

Despite the acknowledgement and need for integrated mental health and primary health care, there are still obstacles to overcome. This focus group described the perspective of providers from ACT teams. The ACT team members in the study spoke to the challenges of effectively integrating primary health care with mental health services. There is a significant need for improvement of integration of care, as evidenced by the poor health status and decreased life expectancy of those with serious mental illness (De Hert et al., 2011; Davidson et al., 2001; Lambert et al., 2003). ACT team members in this study discussed strategies used to promote integration of care and provided some recommendations for integration. Professionals working in mental health and primary care should continue to discuss the barriers to integrating care and work together to implement solutions to improving collaboration.

Mitchell, A. J., Malone, D., & Doebbeling, C. C. (2009). Quality of medical care for people with and without comorbid mental illness and substance misuse: systematic review of comparative studies. The British Journal of Psychiatry, 194(6), 491-499.